Sanctions are recorded in the "Sanctions" field. Below it, as shown in the picture, there is a short explanation of how to enter the sanctions correctly. Besides the players, all other team members are also subject to the sanctions scale. Instead of the number, an abbreviation is recorded according to the position:

Since delay sanctions are team sanctions, neither a number nor an abbreviation but a "D" is recorded. 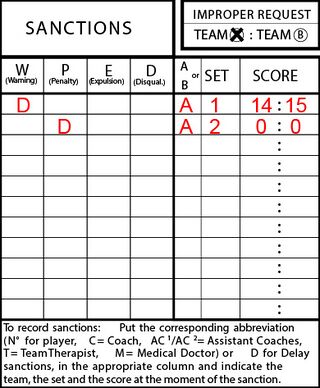 Example: In the first set, at a score of 14 : 15 from the point of view of UVC Graz, a delay sanction is imposed on the UVC. The "D" under "Warning" indicates that this is the first level of the sanciton scale for delays. Afterwards it is entered whether it is team A or B ("A or B"), in which set the sanction was given ("Set") and at which score from the point of view of the team that is sanctioned ("Score").

Before the start of the second set, there will be another delay sanction from Graz. As this is the second misconduct of the UVC Graz. Therefore, a delay penalty (point as well as the right to serve to the opponent) will now be given. The "D" for delay will be entered under "Penalty", as well as the sanctioned team (A), the set (2) and the score (0 : 0). 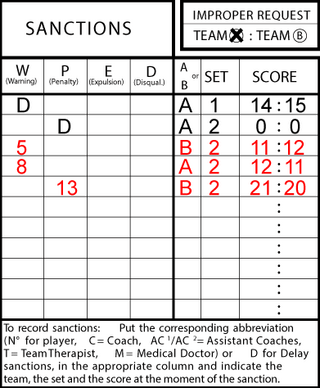 Example: In the second set at a score of 12 : 11 for UVC Graz, an minor misconduct conduct occurs by player 5 of team B, Tirol, and by player 8 of team A, Graz. The referee gives a yellow card in each case.

Later in the set, there is another minor misconduct, this time by player 13 of team B, Tirol. The referee gives a red card because he has already warned the team with a yellow card. Player 13 is recorded under "Penalty", the team he belongs to under "A or B" (B), the current set under "Set" (2) and the current score from the point of view of the sanctioned team under "Score" (21 : 20).

Fig. 34: Circling of a point awarded due to a red card

The point that Graz receives as a result of the penalty is crossed out and circled in the "Points" field. It is the 22nd point for Graz.

A yellow card can only be given once per match and team.