Before the match, all data of the match must be recorded in the score sheet: 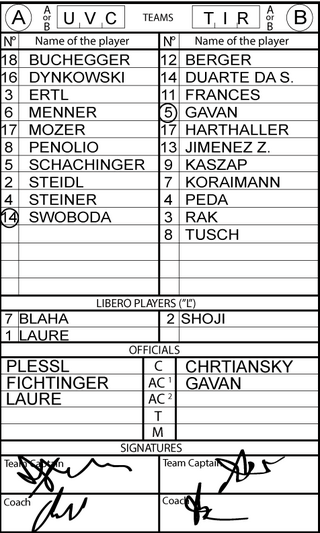 One official of each team must complete his team's player list before the match. Both, the jersey number of each player and at least the surname must be noted. If there are two players in a team with the same surname, the first letter(s) of the first name must be added until a clear distinction is possible. All players who want to take part in the match must appear in the player list.

The team captain of each team is marked by circling his number.

There is a different approach in

Fig. 18: Recording AC1 and AC2 in the older and newer score sheets

As officials one coach (C), two assistant coaches (AC1, AC2), one therapist (T) and one doctor (M) may be present. All of them must be recorded on the match report sheet by name.

Under "Approval", the referees and the scorer(s) are recorded:

If available, the line judges are also recorded here according to their positions in the match (1-4).