4.2.2 Duties of the second referee

The second referee shall assist the first referee in checking the entry lists and identity cards of the two teams. He also selects an appropriate number of match and replacement balls and checks their pressure.

The second referee collects the line-up sheets from the two coaches 12 minutes before the start of the match. In all subsequent sets, he does this during the 3-minute set interval.

The second referee decides on:

Between two sets, the second referee must obtain the line-up sheets from the two coaches and hand them to the scorers. The duration between two sets is three minutes. This time is measured from the last point of the previous set to the authorization of the first service of the next set. This means that the teams should be called back onto the court after about two minutes and 15 seconds. 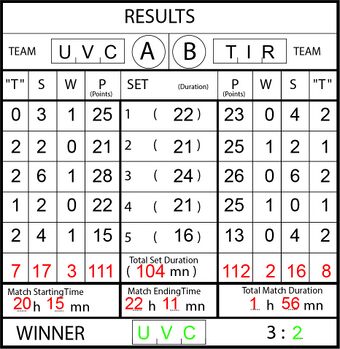 At the end of the game, he is the second last person to check the scoresheet and sign it. He has to check: